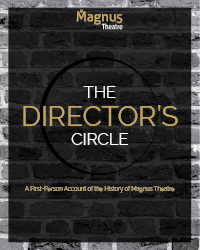 The Directors' Circle: A First-Person Account of the History of Magnus Theatre

× Founded in 1971, Magnus Theatre has influenced the careers of hundreds of professional theatre artists and been the starting point for dozens of award winning world premiere productions.

Enjoy a gourmet dinner and an insider’s trip through the history of one of Canada’s great regional theatres, as told by the people who were there.

*To book a full table of 8, click on the seat in the middle of the table you are wanting to book.

Buy To This Event Directions